Tell me if you have heard this before; “we need more, and/or better leads.” The chances are, if you’re in hi-tech marketing you may hear it on daily, weekly and monthly basis. Why?   According to Forrester consultant Tom Grant, it’s because of the need to feed the funnel.

In his report Tech Marketers Pursue Antiquated Marketing Strategies Grant compared hi-tech firms to other industries “B2B technology companies treat marketing as an opportunity to sell new products and services to new customers.” As he stated “the product is the axis around which marketing efforts turn,” and as a result, the primary objective of marketing is to produce leads.

Similarly, marketers have long held the belief that because of sales short-term focus on making quarterly objectives, it either lacks the appreciation of, and/or the sophistication to understand anything other than lead gen, for example longer-term brand building and awareness activities.

But what if both of these viewpoints were actually wrong. What would happen if you asked sales what they valued, rather than assumed you knew the answer? How might it change how marketing thinks about its impact on the organization?

For one B2B Tech Company, feedback from the sales force is helping them refine their value to the organization. “When it comes to enabling the sales force, we’ve previously relied on what I call “measurement-by-anecdote.” Our goal with this study was to quantify what sales values from marketing so we can focus on the things that make a difference.” said Rick Dodd, SVP Marketing of Ciena, a $2 billion global optical and packet networking company.

To gain that insight the company surveyed its global sales force, including five types of sales reps covering five different account types. Over 400 sales reps provided feedback on their priorities for marketing and marketing’s performance. 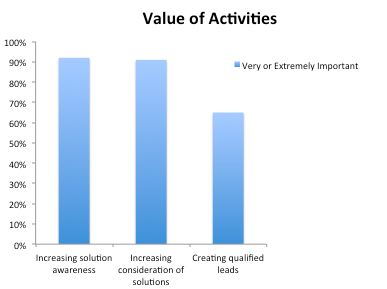 According to sales, the highest ranked marketing activities were at the top of the funnel, 92% of sales said that increasing the awareness of solutions was very or extremely important, increasing consideration was close behind at 91%, only 65% mentioned lead generation.

“Our sales force is very experienced; they understand that technology and industries change quickly. We’ve obviously been successful positioning ourselves for today’s market, and now we want to take best advantage of the big shifts in our landscape. The survey showed us that for sales to be successful, marketing has to be able to change customers and prospect perceptions,” according to Dodd.

Perhaps the most interesting insight to come out of the research, is how Ciena is now thinking about measuring and reporting marketing’s impact on the organization. “Measuring pipeline value is a struggle in our business”, said Bill Rozier, VP of Marketing. “We have long, complex sales cycles that make it difficult to isolate marketing’s impact.”And they are not alone it in that challenge. The Aberdeen Group’s recent Demand Generation study found that 77% of respondents rated visibility into lead performance across stages as very valuable, but only 43% indicated they can do thi effectively.

Instead of spending a lot of time and energy in trying to perfect an imperfect process, thecompany is focusing efforts on measuring marketing performance at the macro level. “At the end of the day, our performance is ultimately measured in sales success, so that’s what we are focusing on measuring”, said Rozier.

It’s a unique approach, and perhaps one that should be considered by others, because the challenge in performance management is often in defining the right metrics to drive the intended behaviors.

Ciena’s approach, as Dodd concludes, is to put the focus on the right conversation; “As we learned through the research, contributing to the success of the sales force isn’t just about one thing, it isn’t just lead gen. I appreciate that they give us credit for doing a good job when compared to competitors, but what we’re most interested in understanding is how well are we doing in enabling them to win. If the sales team rates our contributions as being valuable to their personal success, then we know we’re doing the right things.” 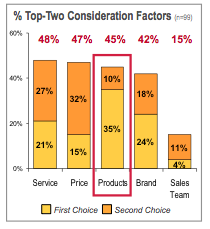 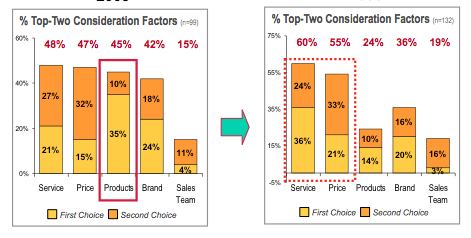 A few weeks ago, my wife and I got a chance to get away for the weekend. On our way to the hotel I realized that I had forgotten my razor. We were passing a shopping center at the time so we pulled in and I spotted a Dollar General store.  I went in and bought a $1 pack of razors. A commodity product, down economy, it was necessity; so I figured it was a good decision… until I used it.

The only way I can describe the experience is to say that I couldn’t tell if the razor had a blade on it until it sunk deeply into my skin. It skipped over some parts of my face and dug in on other areas. I had nicks and cuts everywhere; I looked like a schoolboy after his first shave. The lesson I took from this is that sometimes I think you have to feel the pain to understand and/or appreciate the value of quality.

From what I have observed lately, I believe companies are starting to, or will come to this same realization. We’ve all cut back to weather the economic storm. Are companies doing a much better job at managing costs now? Absolutely. Have they finally made the cuts they should have made a year ago? Yep. Have they perhaps gone too far with some of their cost cutting? We’ll see.

What’s important to remember about this economic downturn is that it started in 2007. It’s only gotten dramatically worse in the past six months, but many companies started cutting back long before the current “crisis” hit. As a result, three or four rounds of adjusting cost to meet declining revenues have already occurred.

The fat got cut a long time ago. They cut into the muscle around mid-year last year and now are cutting into the bone in many industries.  If you’re a vendor or service provider like us, you may have experienced this first hand. But hang in there; I believe that companies will return to quality providers. It’s only a matter of time before the results of the “nicks” and “cuts” really begin to hurt.

Each company has a different tolerance for pain, but when, for example, the “cost saving” decision to change your outsourced customer service provider leads to rising customer attrition and declining service levels, those “cuts” will begin to sting. When this happens, and customers can see recovery on the horizon, they will come back to quality.

The question you need to ask yourself is; has your organization created the $1 razor? With all the cost cutting, is your product/service at the same quality level and/or can you deliver the same customer experience. When customers do return…so do their expectations.

Be careful, during an economic downturn the price/value equation can become unbalanced. Like many companies, you’ve probably created a lower cost, stripped down model, hoping to gain or hang on to market share. If customers return with smaller budgets, will they adjust their expectations of value as well? Should they expect less? Probably, but will they? Not unless you manage their expectations.

Adjustments will have to be made, and it will not be a smooth shave. You may already have the “nicks” to prove it but don’t let your customers end up feeling the pain.