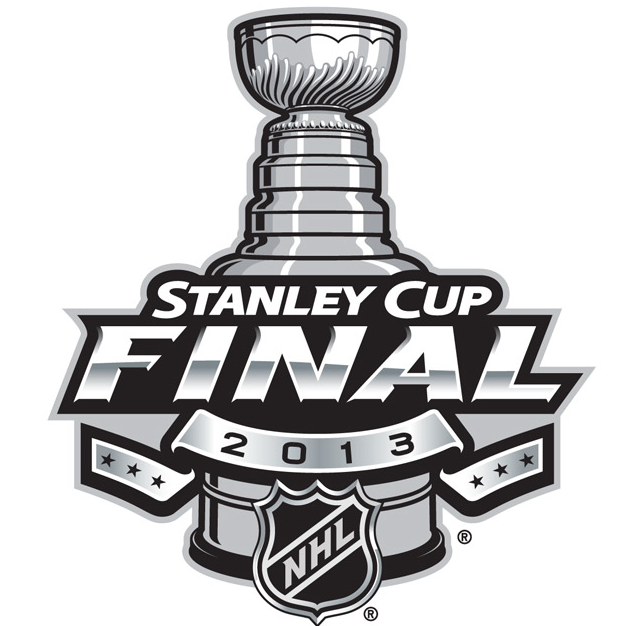 This time of year, America’s third or fourth (depending on where you live) most popular sport gets its moment in the sun.   The Stanley Cup finals begin this week and the nation’s attention turns to ice, hockey sticks, pucks, and maybe mullets.

For business marketers, the “holy grail,” or in this case the “Stanley Cup,” has been trying to demonstrate the business impact of social media.  Not defined by adoption, usage, or engagement, but by influence.  Proving that social media and/or social networks can influence buyer behavior.   New insight suggests that it might be time to lace up the skates and put on the pads.

Word of mouth (WOM), defined by person-to-person communication be that in person or over the phone, is and has always been the most used, and most influential channel for business buyers.  Sometimes also described and measured as NPS (Net Promoter Score), it is the “Wayne Gretsky” of driving influence among decision makers, both in new acquisition, and for renewal.

Unlike WOM, Social Media has struggled with demonstrating influence.  Adoption and usage rates continue to grow, but the impact on B2B decision makers has been difficult to nearly impossible to measure (btw – this is not unlike other, more established media channels).

That was until now. Research from Buyersphere may give us a clue to how social media may influence decision makers in the near future, and it has given us a couple of “hockey sticks” and a “puck” to play with.

According to Buyersphere’s Annual Survey of B2B Buyer Behavior, even though buyers mention social media (and providers such as Twitter, Facebook and Linkedin) when asked to rate their usage and the usefulness of channels when searching for vendors, they fall off the grid when asked to evaluate their influence.  As you would expect, word of mouth came out on top.

Diving deeper into the research, it revealed a few game changing findings.  Twenty to thirty year olds (Gen Y), act like no other previous generations.  The first “hockey stick” is somewhat known — twenty-something business buyers are roughly twice as likely to seek information or advice from social media as the generation before them (31-40 year olds).   And almost four times more likely to than the baby boomers (51-60 year olds). 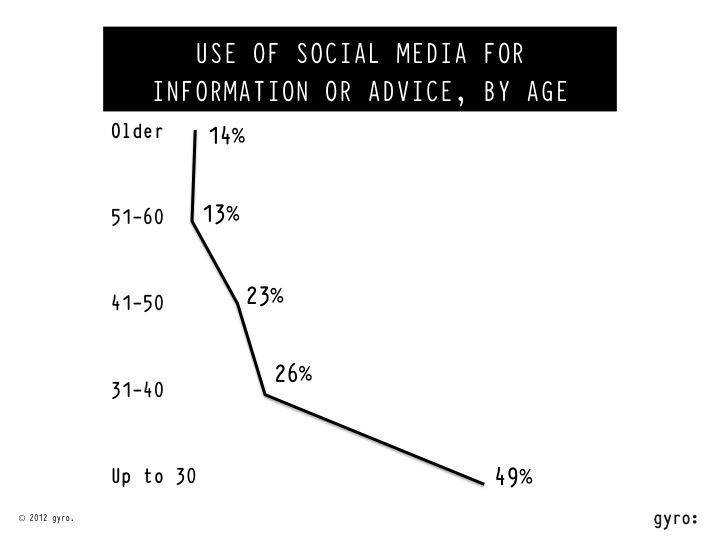 The second hockey stick, and the one that may end up being somewhat problematic for marketers, is that 49% of Millennials stated that they wanted to create and publish their own professional content.   They not only want your content, but they also want to be able to disassemble it and repackage it with their own point of view.

Marketers most powerful and influential channel is now being redefined, and this presents the best opportunity to date to demonstrate the impact of social media on buyer behavior.  “To skate to where the puck is going to be” as Gresky used to say, we need to plan now.

To define the approach we need to understand the components of “social media” that are often lumped together – social networks and social media.  Social networks refer to the connection among users and their social structure (friend, business acquaintance, etc.).

Social media is defined as the online channel used to generate, access and distribute content.  The distinction is important because of the way different generations of business buyers use and value them.  This is key to unlocking influence.

We know that their social network heavily influences Gen Y, more than any other generation.  We know that half of them want to produce and share their own content, 60% upload content to the web, and 62% rate products and services on the web.

So for Enterprise accounts, where Gen Y is 5-10 years from occupying the C-Suite, take a lesson from McDonalds and “grow your own customers.”  Get Gen Y hooked on your content by involving them in your brand and making your content modular so it’s easy to repackage and share.  The route to influence is through cause marketing efforts delivered via mobile devices.  Thirty-seven percent of Millennials say they are drawn to products with co-branded campaigns.

For small businesses, which Gen Y owns close to 1 out of 3, according to the Executive Council of Small Business (ECSB), the goal should be to make them advocate for your brand, product or services to their network.  To do that, focus on issue resolution, the number one loyalty driver.  For prospects, provide them with information that is useful.

According to the ECSB, the number one pain point for all small business owners is sales and customer acquisition; being twice as prevalent among Gen Y owners.  Specifically, lead generation and successfully competing with other small business owners.  Help them understand how your products and services can help them grow their business.

Even though there is potential for social media to deliver a real, tangible business impact, it will be similar to this championship series.  It’s not going to be quick, expect to lose a game or two along the way, and to be successful you’ll need to take many shots on goal…hell, you may even lose a tooth or get a “shiner.”

On Wednesday November 17th, I attended the Corporate Executive Board’s Enterprise Council on Small Business member meeting in Philadelphia.  The meeting entitled Selecting and Building Channel Partnerships included attendees from about 10 member companies such as; Xerox, Symantec, Experian, Erie Insurance and Comcast, who hosted the event.

ECSB practice leaders opened the meeting reviewing recent research on enabling channel partners to effectively sell to small business (title of the post).  The research compared the performance of high and low performing partner programs.  The meeting also included a review of best practice case studies.   Highlights from the research include:

Highlights from the case studies and discussion:

My key takeaway was that there is a significant opportunity to improve partner performance that is being missed. The opportunity is directing partners to desired customers and/or market segments.   Granted some partners are selected just for that reason, but in general, companies do not typically articulate what customers they want or who are best for their products.  A couple of members mentioned that they organize products against customer segments and assume that points partners in the direction of those customers.

I don’t think that is enough.  At the end of the day, manufacturers know how to sell products better then partners.   As a result, they should know which customers/type of customer will most value their product or service, and those customers that will be most profitable and loyal.  Use this information to help partners understand, and identify what a good customer looks like, and why.  Give clear direction on what you want.  If there is one thing we’ve learned from previous research, it is clear communications with partners is highly valued, that in itself might be a wi

Large companies have long recognized the opportunity to address the needs of small business (26 million firms <99 FTE’s).  Over the years, companies like IBM, American Express and Google have spent millions to try to understand the segment and convince business owners that they have the products and services they need.

Yet, they still struggle to capture of the opportunity in this segment, for a number of reasons.  Despite their best efforts, they often fall back into their “big company” ways.  They speak the wrong language, have a hard time creating compelling offers, and/or reinforce perception that they’re too big to serve small businesses.

Whether you’re a Fortune 500 company or an INC 500 firm, here are 10 key points to keep in mind when selling to the Small Business segment.  All Insights below are taken from various research reports produced by the Executive Council on Small Business.

1. Don’t call them Small Businesses – despite this becoming common knowledge for many selling to this segment, companies still make the mistake.  Despite the fact that 60% of small businesses, as defined by the U.S Census Bureau 2008, have less than 5 employees, don’t call them a small business.

2. There are 2 different types of business owners – one type of owner is focused on growing their business, the other surprisingly, is not. Know the difference when targeting this segment.   “Satisfaction owners” know also as “lifestyle owners” are older (>46) and more likely to have higher revenue businesses.  They are in it because they love what they do and enjoy the work-life balance ownership present. “Growth” owners are more likely to be in retail, and more likely to have owned or own more than one business (serial entrepreneurs). 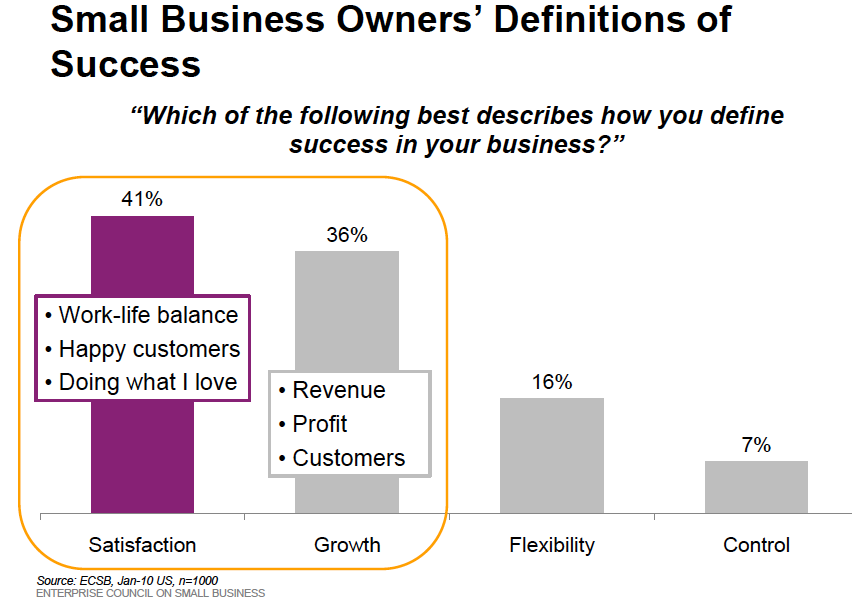 3. They are in the Service Business – for the most part small businesses are focused on providing services.   60% of small business are; professional services or other services (dry-cleaning, florist, cleaning service, etc.).

4. Speak THEIR language  – As you might have already picked up, this will be a reoccurring theme in the post.  3X as many business owners find a sales person more trustworthy if he/she discusses savings in dollars rather than percentages.  To be credible give them specific details, contact information and testimonials for other business owners (Top 3 Indicators of Credibility).

5. Small things are a BIG Deal – according to the research, a major purchase decision starts at $500.   Cash flow is the lifeblood of small business don’t under estimate your need to prove value or ROI on what you would consider small transactions.   If you’re talking about cost savings, express it in monthly terms rather than annual.   2X as many owners expressed seeing savings monthly rather than yearly.

6. Resources and Time are Tight – owners now make a purchase decision in less than a week for complex and simple products.  43% said that it now takes them less time to make a decision than it did 5 years ago.   They search online, visit your website, and then call to confirm what they’ve learned.   SEO is critical if you’re going to play in this segment, as you will see below. 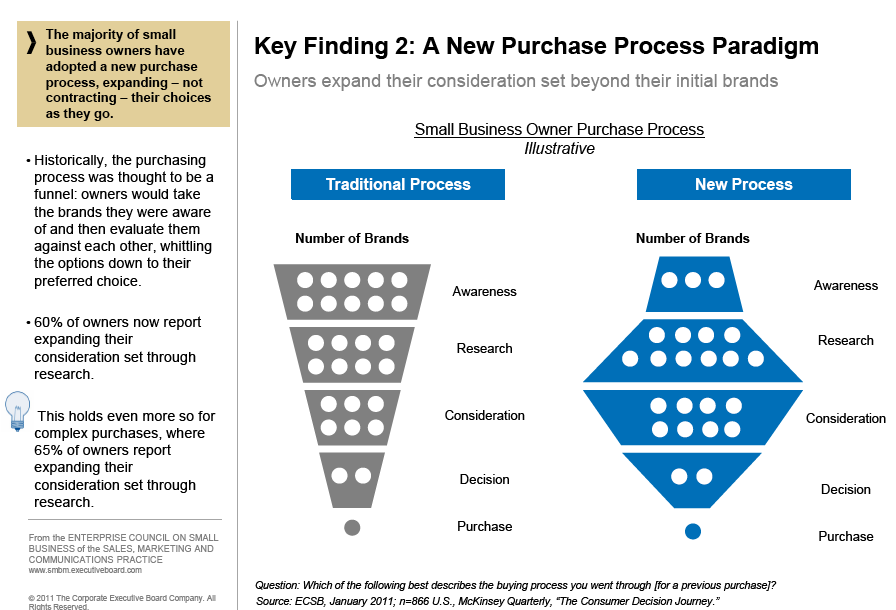 7. They Love to Search – Business owners purchase patterns have changed, instead of contracting it’s now expanding.   Rather than narrowing their list of vendors, 60% of owners now report expanding their consideration set through research.

8. And it’s Local – business owners search for a product or services by name, not a brand, and they include their local area (e.g. “internet providers in St Louis”).  They don’t include “small business.”

9. Search is Important, but Social Isn’t – as you saw in the previous examples Search is critical for being considered, but interesting enough, Social Media is not.   The reason – small business owners view social media as a channel to speak about their businesses, rather than hear what suppliers have to say. 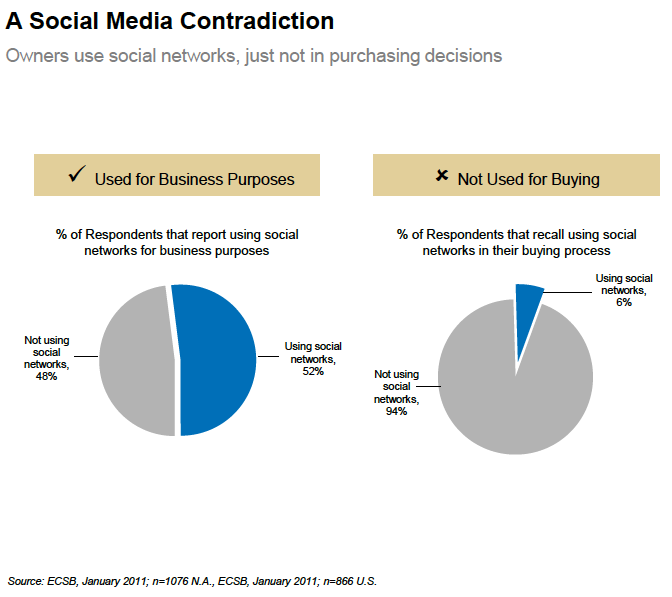 10. If You’re Not Relevant…You’re Not Relevant.  In today’s marketplace to resonate with audience content must be personalized.   A recent Forrester report showed that most sales forces very capable of discussing products and solution, and even the industry issues, but when it came down understanding the buyer’s role or situation they failed. 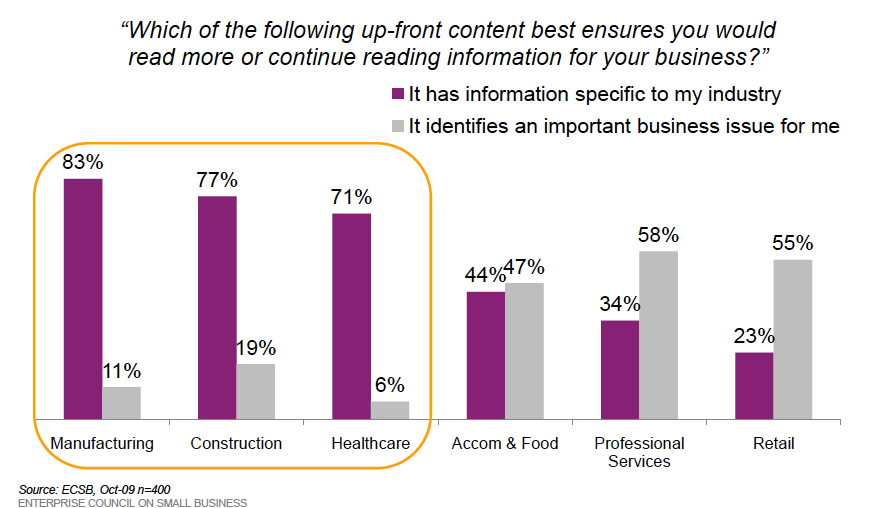 Satisfaction owners are looking for products and services that save them time savings and strengthen their relationship with customers.   With Growth Oriented owners talk ROI, and time to payback.

Business owners are heavy users of search for researching vendors, and they use social media to promote their business, but not for buying from vendors.   To be relevant your content must speak to their industry or similar size businesses.

If you talk to them like you know them, show them you are committed to building a lasting relationship this dynamic market can power your organizations growth.