In the 90’s casual Fridays brought about the slow death of formal business attire in the office place. In the new millennium, mobile devices effectively eliminated the “9 to 5” workday and erased the line between personal and professional. Now, the “Gig Economy” is about to kill the concept of a company employee.

The freelance workforce is growing three times faster than the U.S workforce. At this rate, according to a recent survey by Upwork and the Freelancers Union, independent workers will be the majority by 2027. Yes, more people will work for themselves than for corporations, and they will be doing it because the want to…not because they have to.

The work is not what you would think of as typical “gig economy” jobs, e.g. an Uber driver.  According to the FIA survey of close to 6,000 adults, this group is preparing for the future more swiftly than traditional employees. Nearly half of the freelancers surveyed told researchers that their work is being impacted by AI and robotics (only 18% of the traditional workforce). As a result, 65% are staying on top of the latest trends and are putting time aside to learn new skills, compared to 45% of traditional corporate employees.

As a result, this specialized workforce is finding independence because it is developing high demand, hard to find skill sets, creating an opportunity for them to offer their time to the highest bidder. Rather than work on projects dictated by an organization for a set salary, they can choose to work on various projects based on their interest for multiple companies. Selecting projects that advance or refine their skill sets. Deepening their experience that increases market value. This practice, commonly seen among IT workers, is now making its way into other areas like marketing and HR because of the increased use of digital tools and platforms.

It’s not only employees who are driving this trend. Employers see this as an opportunity to optimize their staff cost. The “Open Talent Economy” described by Deloitte is expected to grow significantly in the next 3-5 years. According to their research “off-balance” sheet employees will grow 66 percent over that time period. While only 6% of the C-Suite rated this trend a priority in 2017, 26% believe it will be important in the next 3-5 year, an increase of 400 percent, one of the largest increases seen in their annual Global Human Capital Trends report.

Sitting between, and enabling these trends are digital platforms like Upwork, BTG and Carbon Design which are enabling this transition. McKinsey Global Institute report, A labor market that works: Connecting talent with opportunity in the digital age, states that these platforms could boost global GDP by $2.7 trillion by optimizing the match between work and employees, and by pulling 47 million inactive people (globally) into the workforce. As the US reaches full employment these “inactive workers” will be a critical source of labor capacity. 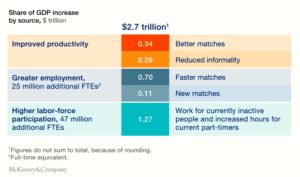 Unemployment fell to a 20 year low in Q4 of 2017, now standing at 4.1. A tight labor market will increase competition and opportunity for employees with specialized “in demand” skill sets. Talent now has leverage; however certain items may slow this revolution in the workplace.

Healthcare is the primary one, retooling and training of inactive workers being the other. Look for these talent platforms and AI to play a role in resolving those challenges in the future. Additionally, changes to regulatory frameworks, corporate practices and individual mindsets, may be required according to McKinsey’s research.

One thing is certain, the forces behind this transformation are accelerating driven by the recent tax changes. Apple and Amazon have announced they will be creating tens of thousands of jobs in the US. Added that amount of new positions to an already tight labor will force us to think about how work is done, and who does it. The jobs may be here but where the “work” gets done may not. We may not only see the “death” of the company “employee” but also the concept of a “domestic” workforce.