I joined gyro in 2010.  At that time we were called GyroHSR, and were a collection of 9 small to mid-size agencies from around the world that were part of a roll-up.  We didn’t share a common language, system or culture.  What held us together was a vision of being the world’s best B2B agency.

The first year was challenging.  I came into the ad business from the outside.  My experience had been consulting and marketing services.  I naively thought it would be an easy transition, that my world and this world weren’t that far apart.  I was wrong.  Everything seemed to have a learning curve, I spoke a different language and the other side of my brain, long neglected, needed to be developed. 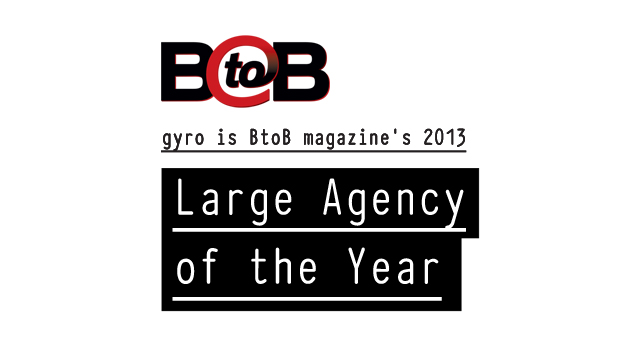 Over the next two years almost everything would change.  We dropped the “HSR” and became known solely as gyro.  Our investors brought in a new management team and our new CEO & Chief Creative Officer, Christoph Becker would completely remake our creative teams across the network.  But most importantly, Christoph would change our culture, our language and our focus.  And along the way, the right side of my brain began to develop.

During this time, we undertook two intiatives that I think have set us up for the success that we are enjoying today.  The first, was that we believed that “b2b marketing” as we knew it, was “dead”.  Targeting a business buyer by a title, at a business address, during business hours, was an antiquated concept.  We would later prove that to be the case with our @Work State of Mind research conducted with academic institutions and Forbes (click here for the research report).

The second was that ideas needed to be “humanly relevant”.  That behind every business decision maker was a person, and that person made decisions based on emotions.  Our research would show that the buyers journey was, in fact, a very rational process up until the point of the decision…and then emotions took over.

It became easy to differentiate ourselves from competitors, and clients/prospects believed in what we preaching.  As the wins starting coming, our culture started to align around what we call UNO.  One language, one process, one culture, we became unified across the network.  Client teams from across the world began working together to deliver the best ideas and outputs, regardless of the location.  Our work starting winning awards, and the world started to notice.

What’s different about BtoB magazine award today, isn’t necessarily that we’ve been recognized, gyro has won awards in the past.  But rather it’s an external validation point that we are on the right path, and the hard work is paying off.  We won in the “Large” agency category (our first year in that category), going up against the “best of the best,” like Ogilvy.  It’s a litmus test that our vision of being the best B2B agency in the world, and the reason why most of us joined gyro, is being realized, at least in the U.S…and at least for this year.

We not done yet, we still have work to do and clients to dazzle, but for now…we’re Numero UNO, and it feels good.